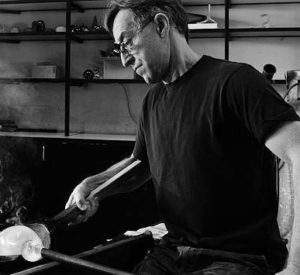 Australian born Robert Wynne studied Visual Arts at Monash University, majoring in ceramics before going on to complete a Master’s Degree in glass at California State University.
Robert’s work is featured in galleries around Australia and the world; in prominent public and private collections including the new Parliament House in Canberra, the Powerhouse Museum in Sydney and the private collections of President Bill Clinton and Sir Elton John among others.Robert Wynne’s work portrays contrasting impulses within. He loves the challenge of technical precision but he needs to be able to play and explore. Robert enjoys making beautiful objects but he’s not afraid to create pieces that evoke emotions more complex than just aesthetic appreciation. In some ways Robert Wynne is an anarchist, he’s not happy when things are just comfortable. He is restless, always looking for an angle and this is reflected in a body of work that is quite diverse.

Having said this, there are common threads running through his work. He loves the gorgeous glow of light through frosted glass and has a fascination with lustrous, iridescent finishes; particularly with the way that light is manipulated, reflected and transmitted. Robert Wynne takes inspiration from a broad range of influences including historical glassmaking practices and formal sculptural dialogue. His recent work featuring the Raven engages with themes of desire, the fragility of wealth and the concept of security.