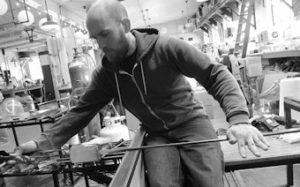 Sean was born in the suburbs of Philadelphia and now resides in Seattle, WA. From an early age he was inclined to create with his hands, he took his first glassblowing class at age 15 and has been a maker ever since. Sean received his B.F.A. from the Appalachian Center for Craft in 2005,  since then  has been a working artist, meanwhile sharing his knowledge as an instructor, teaching assistant and staff member at schools and workshops in the Northwest and abroad. His work resides in the collections of the Northands Creative Glass Center in Scotland and the Glassmuseet Ebeltoft in Denmark as well as numerous private collections. Sean had the honor to serve on the Board of Trustees of the Pilchuck Glass School from 2009 – 2012 and in 2012 he was hired to the staff of the 3D4M in the University of Washington’s School of Art.